“If I have seen further than others, it is by standing on the shoulders of giants….” ……….…Sir Isaac Newton 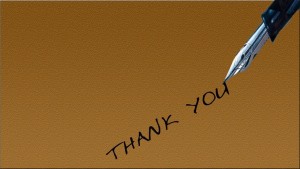 As an anecdotal observation, not one company in 100 issues a letter of appreciation…. at the end of the year — to all customers who paid their bills on time, or nearly so, saying, in effect:

“We seize this opportunity to say “thank you” — for how you paid your bills to us this year….for assisting our ability to conduct our business in an orderly manner, and with a sense of dignity, supporting our ability to fulfill our obligations to our employees, customers…. and suppliers”

How many letters….with that message content…..has your organization ever received from a supplier?

Would you remember receiving such a written note of appreciation, if you had received such an acknowledgement?

Would you show that letter to others in your organization? (I’ve seen such a letter — framed — on the Director of Purchasing’s office wall….once….!)

Where would that supplier be in your priorities to…. pay invoices due….?

“When the great scorer comes to write against your name, he marks not that you won or lost, but how you played the game.”………..Grantland Rice